In 1937 two Poles (Jan Alfred Szczepański and Justyn Wojsznis) made a first ascent to the summit of Ojos del Salado, the highest volcano in the world – 6,898 meters (22,615 ft) on the Argentina-Chile border. Our team, in the 75th anniversary of this event, once again wants Polish names to be engraved in the history of conquerors. We intend to conduct a pioneering project, combining medicine, diving and exploration. On the eastern side of Ojos del Salado there is a permanent crater lake about 100 meters in diameter at an elevation of 6,390 meters (20,960 ft). The lake is still unexplored. It is believed to be the highest situated lake in the world. We intend to reach the lake by a new route and make accurate measurements and examine the physicochemical properties of water. We would like also to make a few scuba dives in the lake, trying to break the Guinness world record for the highest altitude diving. Our doctor will conduct research on the physiology of the human body in high altitude conditions and in extreme diving conditions. We plan to make additional dives in the two lower-lying lakes and shoot some underwater photos and movie. Probably for the first time in the world. The culmination of the project is to bring back the Polish flag to the top of Ojos del Salado in the 75th anniversary of the first ascent.

Objectives of the project: 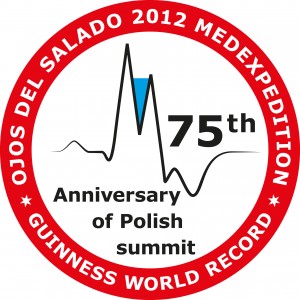